Rybnik, Poland, September 18th, 2001. I was at a Domino’s-ran insane asylum. After my condition was stabilized, I asked the doctor why I was there because my memory was fuzzy. I don’t know what I could have done to have been thrown into an insane asylum. All I knew is that I wanted to leave desperately.

“You were speaking fast to the point of incoherence.” The doctor replied.

“That makes sense”, I replied.

I tried asking if I could leave but I kept getting told no. I don’t know why I wasn’t allowed to leave, considering I felt very normal. I then saw a whole bunch of pizzas getting delivered. I wondered how they made the pizzas here if this was an insane asylum.

I explored the insane asylum some more. I found rooms with just a single pizza sitting on the bed, while some had human-pizza creatures in it. It was an odd sight, the oddest sight of my life in fact. Confused, I talked to the pizza creatures about what they’ve been doing here.

“The moment I started taking medications from here, pizza started coming to mind.” One of the humanoid pizzas said.

“Yeah, same here, these medications are wacky. I remember looking closer to a human before.” Said another one of the humanoid pizzas.

I thought it was suspicious how one of the humanoid pizzas remembered that they were closer to looking like a human before. What could have changed them so drastically? I digress.

Lunch time came swinging by, we were all fed pizzas again. A giant snake always slithered through the hallways serving us our pizza and medications. The snake also made sure that we took our medications and ate, otherwise we’d be taken in and have God knows what happen to us.

I ate my pizza and took my medications and then laid down in bed. I still couldn’t get over what I was told earlier by one of the humanoid pizzas. Then it hit me, what if the medication was turning people into pizzas. I realized this because pizza has been on my mind ever since I started taking the medications I was given by the hospital staff.

I needed a way to escape this insane asylum, but I had no clue as to how I would go about that. I thought of just trying to run out the doors but I’ve seen people tased for running off and taken to a specific room where I heard screams. I didn’t want to be a part of whatever happens in that God forsaken room.

I then thought of a brilliant idea. I call for the help of a staff member, beat them up, then take the clothing and wear it. I’d pass through as a staff member leaving for break. It’s the perfect scheme, maybe even the best in the entire universe.

I pressed the help button in my holding room and a staff member came by. Very polite, I felt guilty for what I was about to do. I then slapped the staff member until they were knocked out and took their uniform. I walked out as if nothing had happened.

I had to greet staff members like they were my friends along the way out. Suddenly, the snake coiled around me.

“Ssssssss. Where do you think you’re going? Sssssssss.” Said the giant snake.

I was panicked, I tried squeezing out but the snake’s grip just got tighter and tighter. The tightness of the snake’s coil started suffocating me. I then gave up as I let my muscles relax. I blacked out afterwards.

I was strapped to a table in a room with a very bright light. I looked around and there were vaccines hanging on the walls. I saw the snake eating some pizza and then it looked right at me the moment I moved.

The snake whistled for people to come over. I saw people with orange peels in their hands. The people then started flogging me with the orange peels. The peels were surprisingly painful. I saw my skin cracking, raw, and bleeding. The snake then grabbed a vaccine and jabbed me with it. I fell sleep promptly.

I woke up in another room with a black mask looking right at me. The mask was pigging out over pizza and was starting at me. I was confused as to why I was brought over to a black mask. But, the mask started talking to me.

“Where did you think you were going to go?” Asked the mask.

I then sat there for hours, watching the mask eat pizza. I tried reaching out for a slice of pizza but a hand came out of the ceiling and slapped me. I asked where the mask got all of the pizzas from.

“The medications turn people into pizzas, and I eat them afterwards. We also use the pizzas as food around here.” Said the mask.

I suppressed the urge to vomit. I ate people. I’m a cannibal. I was disgusted gravely. I felt bad for all of the souls I tortured just by eating the pizzas. I felt very guilty.

Suddenly, a telephone with eyeballs busted through the walls, along with a whole bunch people holding pens as weapons. The telephone had come to free me. The mask looked in shock as I left the room. I stuck my tongue out at the mask and it got enraged. Then, a blue pillow shaped like a star with arms came out from hiding and started attacking the telephone.

We all made a beeline for the exit after we watched the telephone and star pillow fight to a standstill. Once we left, the insane asylum blew up and the mask, telephone, and star pillow flew out, going their own separate ways.

Finally, I had escaped the insane asylum. 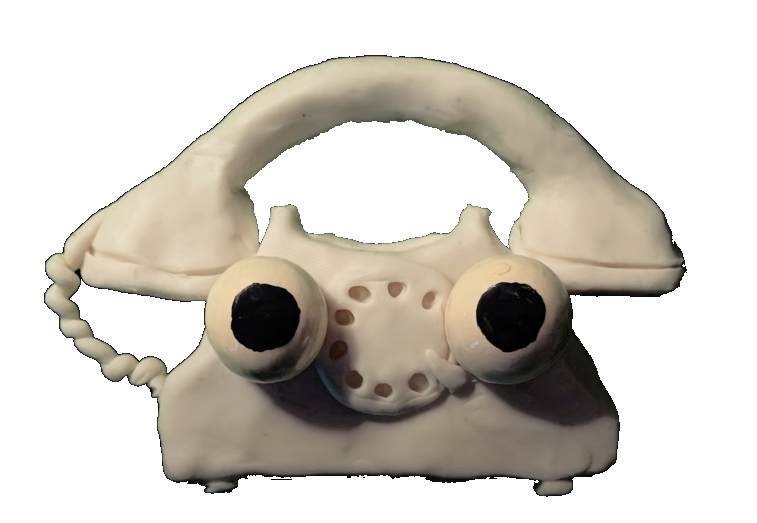